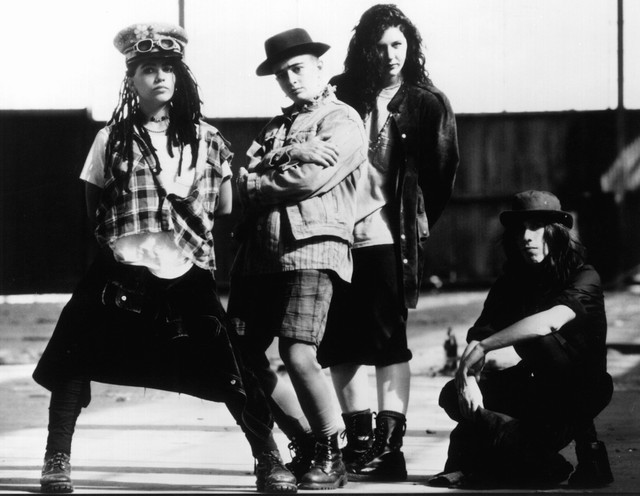 4 Non Blondes howled their way onto the charts in 1993 with "What's Up?" and then vanished without a whisper. Formed in 1989 with Linda Perry (vocals), Shaunna Hall (guitar), Christa Hillhouse (bass), and

Wanda Day (drums), 4 Non Blondes had no problems attracting major labels based on live shows and local radio support from KUSF, but the labels didn't know how to market them. After Day was replaced by Dawn Richardson, the group was eventually signed to Interscope Records and released Bigger, Better, Faster, More? in 1992. Although Hall contributed guitar tracks and some songs, she left before the album was released (replaced by Roger Rocha for the tour). Dominated by Perry's high-pitched singing, "What's Up?" was slowly added to modern rock stations and then crossed over into the mainstream, peaking at number 11 on the Billboard Top 200. The video for "What's Up?" became a smash on MTV, propelling sales of the album to over six million copies worldwide. "What's Up?" was selected as Best Song by the Bay Area Music Awards; moreover, Perry was chosen as Best Female Vocalist and Bigger, Better, Faster, More? won for Best Album. The group toured with Neil Young, Pearl Jam, and Bob Dylan. The band recorded tunes for the soundtracks to Wayne's World 2 and Airheads. However, Perry felt that the group had become too pop; consequently, she left 4 Non Blondes. She released her solo debut, In Flight, in 1995. Perry departed from Interscope Records in 1998 and recorded her second full-length, After Hours, for her own label, Rockstar Records. ~ Michael Sutton, Rovi