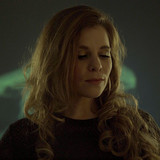 Ozya is a singer/songwriter born in Brussels from Greek parents. As a teen, she listened to Portishead, PJ Harvey, Jeff Buckley and Bjork. Her desire for her artistic expression led to her becoming a jazz & blues vocalist and gave her the opportunity to collaborate with many great musicians both on stage and in the studio. She has lent her voice to the film industry many times, most recently the soundtrack to "The Hunger Games". She also attained number 9 -amongst 19.000 candidates worldwide- in the ISC contest (USA) with her single 'Something More' in the blues category. Nevertheless, she has always dreamed of pop music, electro and sonic textures of the British sound she has always appreciated so much. She sent a demo via Facebook to producer Tim Bran (London Grammar, La Roux, etc) in 2018. 48 hours later, she received a positive response.'Would you remember me' and 'For all the good' are the two first singles stemming from their collaboration. Ozya's debut album was released on the 26th of March 2021.