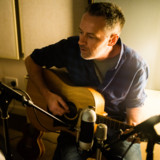 Andrew Howie is a Scottish singer-songwriter, multi-instrumentalist, producer & music tutor who's been writing, recording and releasing his own music for over two decades. He combines confessional & empathetic lyricism with acoustic instruments, noisy electronics & ambient textures to create introspective, hook-laden songs about uncertainty, doubt & love. You’ll usually find him either holed up in his home studio or playing in your living room. From 2000-2013 he made a vast amount of music under the name Calamateur, releasing 5 albums and several EPs, singles and mini-albums, while receiving a good deal of radio play and critical acclaim along the way. His 2015 album The Great Divide was the first to be released under his own name. It retained many of the characteristics of his work as Calamateur (guitar-based songs submersed in other-worldly electronica) but was a huge step forward in terms of songwriting and production. Since then he's released Victory, Scars Are Like A Beacon (an ambient reworking of The Great Divide), I Can Sing A Rainbow (another ambient album), Lonely Hummingbird (a collection of co-writes with American songwriters, including Rebecca Pronsky , Denison Witmer & Amy Allison, & Solo Guitar Loops 1 (a collection of improvised electric guitar pieces),

the electronica album Micronations and the accompanying Fragile EP.