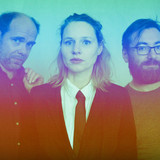 Leisure Tank is an Anglo-German alt. rock trio based in London. “This is bright, raw, energetic stuff with much skillful use of looping to add to KC’s tremendous voice and Budi’s complex and innovative drumming.” (Slap Magazine, Oct 19) Leisure Tank is raw, poetic rock with unpredictable song structures and heavy, danceable grooves. K.C.’s voice and lyrics have been compared to early PJ Harvey, Anna Calvi, and Leslie Feist. After their first EP ‘Isabella’ and the download single 'Red Roses' in 2015 they toured Germany, Switzerland and the UK followed by the release of their debut album ‘WetSuit’ in Oct. 2016. This album received positive reviews in the UK and Europe. March 2018 saw them record the single ‘Higher’ with Grammy Award-winning producer Jimmy Hogarth at his Hoxa HQ studio in West London. This got air play on BBC Radio 6 Music by Tom Robinson. 2020, after some years as power-duo, the band has added David on bass with enormous effect. New songs and releases include the roots music influenced single ‘Moema’ and now the release ‘We Don’t Burn Anymore’. ----------------------------- live Reviews: “As if PJ Harvey played Cream and brought Anna Calvi into her band...they rock in an intelligent way with lyrics akin to poetry. Keep an eye and ear out for Leisure Tank.” pluggedinbrighton.com Feb. 20 “Brilliant!” Slap Magazine Oct. 19