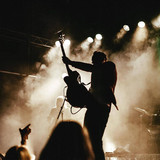 Brut Boogaloo have been a household name for rock lovers in Norway since the release of their debut LP back in the early mid-2000s, which was followed by a string of big festival gigs. Their sound is consists of groovy rhythms, big and confident guitar riffs, catchy vocal lines and bottomless energy. The fact that the band loves rock is evident in every tone. Their music is inspired by the greats from the 70s with newer Scandinavian rock mixed in, but the band’s arrangements are truly their own. After honing their skills for over a decade the band truly shines as a live act and there are no gimmicks to what they do. They deliver a show so tight, playful, and confident that it’s all but impossible not to get involved.