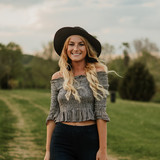 How many people at 23 years old can truly say they’ve been pursuing their career since age 11? That’s when country artist Afton Prater picked up her first guitar. A year later she wrote her first song and at age 14, she ventured to Nashville to record her first EP. Young upcoming country artist Afton Prater is one of the few who can truly say she’s been chasing her dream since the 6th grade.

Afton is originally from the Pacific Northwest, but recently moved to Nashville to pursue her dreams after receiving her Bachelor's degree from Central Washington University. Back home, she had the opportunity to open for Kelsea Ballerini, Josh Thompson, and Drake White. Afton’s success so far, the talent she’s developed, and the hard work she’s put in, has led her to record her latest singles, ‘Till You Find One’ and ‘Every Bar’, which will be released within the next few months.