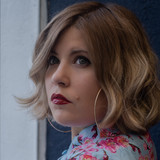 Spanish singer. Writing & composing in a retro-pop universe in Paris. First album "Cherry Blossom" will see the light soon in 2021. Used to tour around Europe & South America singing blues & classic rock'n'roll. Contestant in The Voice (Spain) 2017. TEDx speaker and performer in TEDxArxiduc Mallorca (Spain) 2019. Creating a monthly podcast on ScannerFM: “A Women’s World” since January 2021. ... Born in Vilafranca del Penedès, Barcelona (1992). Started studying music at the age of three, acquiring musical language, singing and piano knowledge in differents schools in Catalonia. Studied Media and Communication in Universitat Politècnica de Catalunya and in Glyndwr University, not forgetting her passion for music while training in different disciplines of musical theatre. Being on stages since she was 14, she sang and composed in different bands of many different styles. In addition, between 2007 and 2014 she completed her training with an extensive work in Estill Voice Training either in Barcelona and in London. She discovered the blues as she moved to Mallorca in 2015. Since then, she’s been touring around Europe & Argentine (2018) singing in different blues & 50’s rhythm’n’blues and rock’n’roll bands and also as a solo artist. In 2019, Cecilya moved to France. She’s working on her first solo album “Cherry Blossom”, leading her to discover a new retro-pop universe inside her.