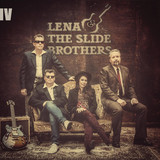 www.lenatheslidebrothers.com Lena & The Slide Brothers was formed in 2009 in Helsinki, Finland. Their debut album "Turn It On" was released in 2010 and it contains a wide range of American roots music styles. The following album "Shine Your Light" came out in 2013 and showed another, rougher, side of the band.

Their third album "The Road" was released in 2016 and received great reviews and plenty of airplay world wide. The latest album "IV" (2019) has been a total winner. It has received a great amount of wonderful reviews and lots radio play all over the world. It has been rated as one of the top albums of 2019 by many DJ's and journalists. The band has played at most Finnish blues and roots music festivals as well as in clubs and concert halls all over the country and in the neighbouring countries Sweden and Estonia. Lena and her band mates occasionally perform also as an acoustic duo or an electric blues trio. In 2016, Lena & The Slide Brothers represented Finland at EBU European Blues Challenge in Torrita di Siena, Italy. In 2017, the band won two categories at the FINNISH BLUES AWARDS, namely The Artist/Band of the Year and The Best Song of the year.