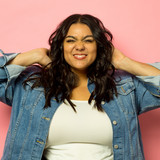 Mama Haze is a Bay Area native songstress influenced by the musical talents of Ella Fitzgerald, Lauryn Hill, and Bonnie Raitt to name a few. Over the last 2 years, she has co- written and co-produced her album Honey, and an upcoming Holiday EP, as well as an additional unreleased catalog with writers and producers in both Los Angeles and Nashville. Mama Haze is partnered with publishing house Zync Music/Roundhill Music and has authenticated a local and global brand with genre bending material, national brand partnerships, community connection and exceptional live performances. Her show creates an atmosphere of genuine audience connection and sensational vocal performance, accompanied by musicianship that nods to an alternate era. Her 2020 plans include a series of West Coast shows and the continued development of content for Mama Haze in the form of audio, video, streaming and live performance. She’s eager to create more music supported by sincere lyrics set to soulful instrumentation. Mama Haze brings to the table a strong sense of inclusivity, feminine pride, and heartfelt empowerment.