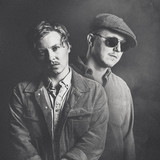 Featuring Jonas and I

Playing pop music with its heart in folk music. This Finnish band released their long awaited second album Where From Here on September 24th 2021. Jonas and I, a band formed around the duo of Jonas Ursin ja Roope Hakkarainen made their debut in 2016 with country-folk influenced album These Days. It was followed by a single release titled Savo’s Song in 2017. A new modern day version of the first regional anthem of Finland. It was performed with Marco Hietala from Nightwish and was the official part of the Finland's 100 years of independence celebrations.