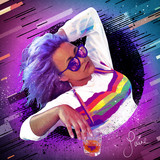 Award winning songwriter & performer, Laine, is a lesbian artist, promoting “representation matters”. The Tampa-based crossover artist‘s music is influenced by country, classical, drumline, trap, rock, alternative, and electronica/dance. Her solo music career kicked off 1/29/21, releasing her first single “What If”, receiving an initial 45K views on YouTube (now over 79K with over 1k subscribers), earning her a top ten finalist award in the World Songwriting Awards for Best Pop Song. YTD she has over 147k lifetime views on YouTube; her latest lyric video, ‘Done Being Nice’ (9/3/21), with over 30k views.   Spotify has over 16k followers, 16.4K streams from latest release, ‘Punish Me’ (8/21/21), and almost 50K all time streams across her music. She continues to have others add her music to their playlists and is excited to see what’s in store next!   She has two publications out for her next release: “Into Night Times”, and will be premiering it with an official lyric video 9/24 @ 12pm (EST).   A former NFL Cheerleader for The Tampa Bay Buccaneers, she remains an active member of her community & in the NFL alumni association. She has a passion for raising awareness for breast wellness, lgbtqtia equality, social activism, & benefitting the youth in her community.   https://linktr.ee/Lainemusicofficial