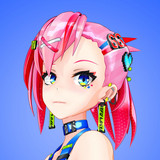 Often described as "Cuteness with a Punch", YFU Baby is an 18-year old virtual rapper that blends together hip-hop and internet culture in a fresh way. Although primarily focused on hip-hip, YFU's versatility comes into display with her ability to mix multiple genres and flows together creating new and unique sounds. YFU Baby is the personification of the “Duality” you see in K-Pop where she is cute, silly, and sweet in conversation, but fierce, intimidating, and sometimes sensual in her music and stage persona. Born June 6th, she decided to rep the number "66" as a part of her identity as it stands for compassion, determination, happiness, and friendships. When she isn't making music or performing, YFU loves to hang out with her fans on Twitch.