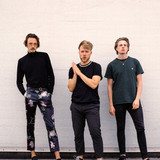 With the release of their debut hit single ‘Golden’ The Brahms’ career took a jump start back in 2015. The band recorded two EP’s in quick succession and went on to win multiple awards, having their first four singles played numerously on different radio stations and playing over sixty festivals in a year. Debutalbum ‘Me And My Damn Dreams’ saw the light of day in 2018. The album features twelve tracks which were recorded in Brixton, London with producer Larry Hibbitt (known for his work with Nothing But Thieves). ‘Me And My Damn Dreams’ showed a more mature side of the band. It consists of hit singles like ‘Sleep’ and ‘I Like To Listen To You Talk’ but also some slower ambient tracks like ‘Shelter’ and ‘Stadium GT’. Essentially being a break-up album, ‘Damn Dreams’ marks the end of an era. The Brahms are back in 2019 with a new formation, a more modern and refined sound and most of all even bigger ambitions. Lead single ‘Feelings’, to be released in October 2019 will be the first step in this new adventure. It’s about feelings of detachment and confusion but also about the freedom of being able to express things the way they are.