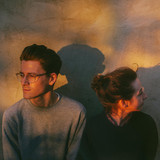 There’s a dualism that runs throughout the lifeblood of Bristol-based Corre. It’s a duo of sorts, but not a traditional one: Henry Green is a cult electronic producer, while Hattie Ellis crafts dreamy photography. It’s this sense of opposites attracting, poles magnetising, that the project is built on. “We’re really intrigued by the shared qualities within two completely different elements,”

the pair say, “but also how their differences can complement each other". Their name comes from “correlate”, a term they kept “circling” back to. In terms of sound, there are clear correlations with similarly hypnotic, ephemeral ambient producers: think Aphex Twin, Nils Frahm and Jon Hopkins. But there’s something new, raw and innocent in the music’s lapping waves. The visuals are realised in a short film, set amidst the mistiness of the Gothenburg Archipelago. There’s a vitality to both the sound and the vision, in terms of necessity but also how the rich piano lines and deep imagery seem to quiver with life. “We think that maybe the vitality in the sound stems from that idea of escapism, the idea that art can transport you to a different space,” the pair say. Although so full of life already, it’s still in its early stages, its possibilities “endless”. Whether you are drawn to the spacious visuals, the dreamy sound, or how the two correlate: you shouldn’t be late to Corre. Kyle MacNeill