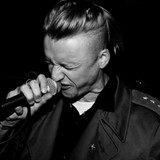 Rapper, vocalist and audio/visual artist from Molde, Norway, TOVANSKÏ lived and worked for 10 years in London under the stage name Chosen Fume alongside longterm producer Chris Fader, before ultimately moving back to Norway switching to writing and performing in his father tongue, a distinct native dialect from the coastal regions of north-west Norway. ILDVINTER, his latest collaborative album with Martin Massiv, was released 30th Nov 2018 on digital and limited run cassette tape via Records of the Fleshgod, an infamous Oslo label that has garnered fans far outside Norwegian borders for its uncompromising focus on dark contemporary music. ILDVINTER recently received a stellar <a href="https://www.coreandco.fr/chroniques/tovanski-martin-massiv-ildvinter-6998.html">8.5/10 rating</a> by French extreme music magazine COREandCO, curiously listing the album alongside metal gigants such as Mayhem, Einherjer and Behemoth, and comparing it to horrorcore group Gravediggaz and early Wu-Tang Clan, albeit with lyrical themes more frequently seen in metal than in hiphop. French label Dead Seed Productions is set to release the album on CD and LP outside Norway. ILDVINTER, an oxymoron translating as "firewinter", is the second in a series of four announced releases by the two rappers, one for each season of the year. Their spring themed Vårsøg EP was released by Oslo label HEADS. He is a member of noise-rap group/collective Tri-Function Million.