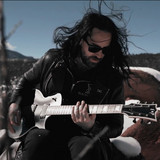 Starting in 2019, Bobby Keller has released three instrumental tracks “Reign in Fire”, “Light Bearer”, and the most recent “Perpetual Dreams”, all part of his highly anticipated solo album, Reign in Fire. All have received recognition from Guitar World Magazine, Brave Words, Loudwire, and countless other major press outlets throughout the world. The idea to start his solo project began with Ben Johnson, a talented producer, drummer and recording engineer currently working under Will Putney (Fit For An Autopsy/Thy Art is Murder) at Graphic Nature Audio in Belleville, New Jersey, producing and writing songs together. Bobby and Ben’s take on instrumental guitar music is without a doubt a one-of-a-kind experience, and will hopefully be something that helps propel the genre even farther into the future. Raised as a native of Orlando, Florida, Bobby has been setting the music industry ablaze with his unique style of guitar playing since 2009, and is considered one of the top guitar players in the United States. Inspired by guitarists such as Eddie Van Halen, Joe Satriani and Dimebag Darrell, Bobby bases his playing in the blues, but also combines both incredible speed and euphonic rhythms into his technique to create a truly individual sound.