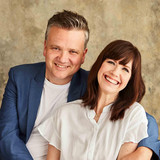 Keith and Kristyn Getty are considered the pre-eminent modern hymn writers in the world today, known for the modern hymn “In Christ Alone" noted by many to be the 'Amazing Grace' of the modern church.

Born and raised in Northern Ireland, they are multi award-winning artists with Keith becoming the first musician of the modern era to be presented the OBE from Queen Elizabeth II for service to music and hymn writing. According to CCLI, they have written over 30 of the top 500 sung songs in USA & UK today and Integrity music estimates that over 100 million people in churches around the world churches use their music in their services. As ambassadors for hymns noted for their passion for music and the church, they have performed as a duo for Presidents and Prime Ministers, as well as an annual national hymns tour and Christmas tour including sell out shows each year at Carnegie Hall and Kennedy Center. They wrote the “Sing” book and founded the “Sing” Conference which now welcomes over 15,000 people to Nashville each year. The Getty Music Group, based in Nashville, has now gone on to become a publishing company, record label, touring company, online learning and foundation, spearheaded by the couple and bringing audiences "hymns to carry for life" Keith and Kristyn live between Northern Ireland and Nashville with their four daughters. For more information on Getty Music and the Sing! Initiative, visit www.gettymusic.com.