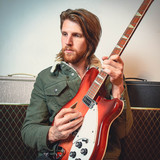 River Lynch and The Spiritmakers

Featuring River Lynch and The Spiritmakers

Singer/songwriter River Lynch walked into a local guitar shop one day, saw a six string Rickenbacker electric guitar on the wall and proceeded to make the best purchase of his life. Starting out in Rochester, NY,

River began pursuing his passion for writing songs, recording, and performing as a solo artist at the age of seventeen. After deciding to leave college, he dedicated his time to creating music. River released his debut album There Goes the Heart EP in 2016 with the help of local musicians Tim Leverett on drums and Schuyler Skuse on bass. The original intention of the band was to release the EP but quickly grew into what has now become River Lynch and The Spiritmakers Buffablog.com describes them as “…a call to arms to fellow rock revivalists ready to reassert the primacy of rock music".