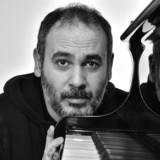 Ordoulidis was born in the mountains of Macedonia, in the small town of Naousa. He lived for years in the –erstwhile– queen of Cosmopolitanism, Thessaloniki. He has lived, studied and worked as a musician and musicologist in Greece, Bulgaria, England, Italy and Switzerland. Ordoulidis writes music for solo piano, the theatre and popular orchestra. He seeks ways to re-read, understand and negotiate the multifarious musical idioms of a large geographical span, a musical ecumene: popular music from Eastern Europe, the Balkans and the Mediterranean. He creates bands with students from the university at which he teaches, often constructing new frameworks, environments and aesthetical cloaks, always in the present tense. He has given performances in Taiwan, Iceland, Germany, England, Luxemburg, Turkey, France, Switzerland. For the last few years he is working on The Eastern Piano Project (www.eastern-piano.com / www.ordoulidis.gr).