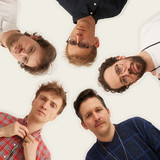 Fazer is a quintet based in Munich, Germany. Each musician comes from a disparate musical background, and together, they form a complex tapestry of influences—big band jazz, krauty grooves, straight-ahead rock, and even a tinge of electronic music. Their unorthodox lineup, which consists of two drummers that perform as a singular unit, codes a strong influence on rhythm directly into the band’s DNA. Matthias, the trumpet player, whose musical upbringing was primarily on guitar, plays much like a guitarist would, occupying the middle range rather than playing high notes. With two drummers, Simon and Sebastian, working in tandem with one another while also following the bass (Martin), and a trumpet and guitar player (Paul) that frequently meet on the same eye level, every member of Fazer is always focused on interplay. They describe it as moving like a school of fish; each player has their eye on everyone else, ready to switch course at a moment’s notice. Fazer's new album ‘Plex’, will be released the 14th of January 2022 via City Slang. https://open.spotify.com/playlist/6JHcmvBi6gW1pYVNuq9xPY?si=9801e95feeec4dab