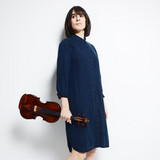 A graduate of the Juilliard School in New York City, Christina Courtin occupies the middle ground between contemporary folk, vocal jazz, and alternative pop/rock. The New York native began studying violin at three years old, and her quick mastery of the instrument led to an interest in singing, songwriting, and performing. After enrolling at the Juilliard School, she began collaborating with the likes of Yo-Yo Ma, Dawn Upshaw, and Osvaldo Golijov, utilizing her talents as both a vocalist and violinist. Upshaw's longtime label, Nonesuch Records, took an interest in Courtin, who eventually signed with the label and decamped to L.A. to record her debut record. The self-titled album appeared in 2009, featuring production from Courtin and two of her bandmates. ~ Andrew Leahey, Rovi