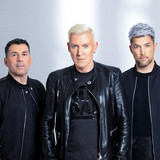 "First we save the rave! Then we save the world!" The 20th studio album from Germany‘s most successful techno act SCOOTER bears the title GOD SAVE THE RAVE – a timely reminder, one beat at a time, that raving must not be forgotten. It’s the kind of call to arms for which H.P. Baxxter is famous, and famously adept at getting the message across. More than ever, GOD SAVE THE RAVE rolls out superbly crafted hardcore tracks, arranged for maximum dynamic impact – an art form that Scooter have elevated to levels of perfection. The Hamburg-based trio have delivered a host of brand new piledrivers to accompany the single tracks already released. Waiting for the raves of the future is a lot more bearable with these tunes to listen to in the meantime. It’s early 2021 and Scooter stand at the zenith of their career. Studio album number 20 will further increase the impressive numbers board! In their illustrious history, SCOOTER have spent more than 500 weeks in the singles charts and 300 weeks in the album charts, selling over 30 million units along the way. More than 100 gold and platinum records from all over the world. On top they scored more top ten hits in the charts than any other German band and can call on a catalogue of top ten tracks to rival those of the most successful artists of all time, names like Madonna, Michael Jackson, Rihanna or Depeche Mode! SCOOTER will celebrate their new album with a massive GOD SAVE THE RAVE arena tour through Europe starting in March 2022!