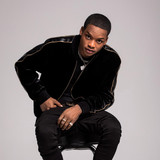 Bursting out of the South Side of Chicago with equal parts melody and moxie, 20 y/o Calboyis one of the rap’s freshest and most exciting new faces. The catalyst for his burgeoning stardom, Calboy's breakout hit, the RIAA-certified Platinum single "Envy Me" is buoyantly melodic and packed with hooks, but also tinged by the violence of Calboy's hometown. Currently sitting in the Top 40 of Billboard's Hot 100, "Envy Me" racked up more than 300M streams across all platforms, including 71M YT views. Despite being released 7 months ago the song continues to clock an additional 549k streams daily on Spotify, and is currently playlisted on Spotify’s Rap Caviar and Pop Rising.