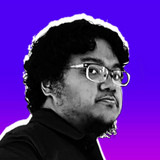 Behan the Scene is a 20 year old rapper and songwriter from Virginia. His first attempt at rap was at the age of 9, and after a 5 year gap, he picked it up again. On October 20th, 2016, he began working with his friend BG and performed for the first time. He has since been performing at open mics, lounges and more. He continues to write conceptual songs, and creates scenery with his lyrics. He has an affinity for pop culture and movie references. He goes behind the scene.