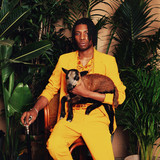 Sévaio “Sevn Alias” Mook has grown out to be one of the best rappers The Netherlands has ever known since the start of his career at the age of 19. His first releases, Ma3lish and Kifesh both reached a Golden status in 2015. His debut EP 'Twenty Four Sevn' followed afterwards and became the kick off for his TFS-series: Twenty Four Sevn 2 and TwentyFourSevn 3, Sevn Alias was rewarded with multiple Platinum records. Another highlight that followed was number 1 hit 'Gass' in 2016, for which he received an Edison Award for Best Hip-Hop. Alias’ debut album Trap Grammy dropped in that same year, which went parallel with a sold-out concert tour and Platinum single, Turnen. Other successes that followed were One Night Stand (feat. Sevn Alias) and the album Picasso that was released in October 2017 with lead single and number 1 hit Patsergedrag ft. Lil Kleine and Boef. In 2018 Sevn Alias founded his own record label, 1OAK Entertainment. The 1st released project was his own next EP OAKINN. Later that year he introduced Recasso as the sequel to Picasso. Last summer the platinum taping artist dropped his 4th studio album, SIRIUS. Sévaio is expanding his vision towards an international public as well by collaborating with artists from abroad. Sevn has kept his grounded perspective and understands that it takes hard work, especially when crossing over to other markets. There is absolutely no doubt that the young artist is going to bring us a lot more in future.