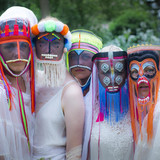 The acclaimed and Danish Music Award ­winning band IKI consists of six singers: Guro Tveitnes, Anna Mose, Kamilla Kovacs, Jullie Hjetland, Johanna Sulkunen and Randi Pontoppidan, and has in the last ten years been at the forefront of vocal experimental music. Working with the voice as the main instrument and improvisation as their artistic tool, IKI has toured most of Europe since 2010. By the use of electronic machines and pedals they manipulate their voices live on stage. The music, which is created in an intense here­-and­-now-­moment together with the audience, goes from trance­like soundscapes to alluring avantgarde beats and structures. In March 2018 IKI released their third studio album produced by electronic artist @Mike Sheridan, adding new sound layers of mysticism to their experimental, hypnotic audio universe. The album was nominated for two Danish Music Awards. IKI released the albums "IKI" in 2011 and “LAVA” 2014, and the EP “DEW”

in 2016. IKI work across different art forms and often collaborates with performers and artist in the fields of music, dance, film, theater, design, visuals and poetry.