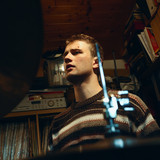 Luke Bainbridge is a drummer and composer whose distinct voice can be heard as a bandleader in his debut release Surface Tension. He has also performed as part of the Duncan Fraser Septet, Rhythms of the City, Seven Steps Big Band and Sister Sally, as well as gigs with Hannes Riepler and Michael Chillingworth. His compositions have garnered critical acclaim in both jazz and contemporary classical arenas - 2018 Dankworth Prize for Jazz Composition and 2017 Compass Composition Prize in association with BCMG - and he explores both of these influences in his quartet project Surface Tension with Kieran McLeod, Ralph Wyld and Huw V Williams. Surface Tension is a band project that has been developing over several years, with the title composition dating from summer 2017. Inspired by the dynamic relationship between composition and improvisation, Surface Tension explores different forms of musical storytelling - from large-scale journeys, to angular ritualistic loops, to multi-geared solo-coaster rides. In an eclectic mix of styles, this project is influenced as much by Béla Bartók as it is by James Brown. Currently preparing for their autumn release, and poised to gig music from the album and beyond, this exciting new quartet is set to make an impression within the UK music scene.