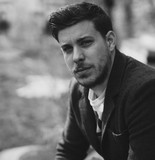 After pursuing a career singing in bands and writing punk songs, Jim took a few years off from creating music to try and start fresh with a clean slate. At the time, Jim says, “every song I would come up with began to sound tired and stale. Every song seemed to follow the same formula, and I found myself writing more to impress record labels than actually writing from my heart”.   During his time spent away from music, Jim’s influences drastically changed from bands like Rancid, Green Day and other 90’s punk bands, to earthy 60’s and 70’s folk. Jim began to study and obsess over the early works of Joni Mitchell, Leonard Cohen and David Bowie, which opened up a whole new world of songwriting and out of the box chord progressions to experiment with. In early 2017, Jim began to write again, fusing his punk influences with earthy folk sounds, creating his own unique brand of Alternative Folk. After making a splash in the underground scene with his 2018 release, The Lookout EP, Jim will be releasing a follow up EP in 2020.