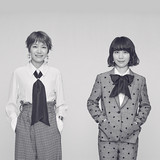 The Japanese girl rock band Chatmonchy (its name is gibberish) began scoring on the national charts in 2005, their success credited, to a large part, to the songs they wrote for anime series, including the popular teen favorite Bleach. The group formally dates back to 2000, when it included the guitarist/vocalist Eriko Hashimoto and five other school kids, all of whom left in 2002 because of the exams. Hashimoto then teamed up with her classmate Akiko Fukuoka (bass), and in 2004 they became trio with the inclusion of the drummer Kumiko Takahashi (prior to that, they also had a guy behind the drum kit, but he didn't stick around). Able now to perform live, Chatmonchy soon won the battle of the bands in Tokushima, and in 2005, several demos later, they were signed by Ki/oon Records, debuting with the EP Chatmonchy Has Come. It generated little buzz, charting at number 50, but the song "Hana no Yume" got radio play. The Smoke On nationwide tour pre-dated the debut album Miminari, which rose to number ten in the charts and was promoted by another Japan-wide tour and gigs at festivals such as Nano-Mugen, Rock in Japan, and Summer Sonic. After that, Chatmonchy had what was arguably their big break: the single "Shangrila," featured in the Hataraki Man anime series, charted at number six. Two subsequent singles, both out in 2007, made it to the Top 20, and "Daidai" (2007), tied in with the Bleach anime, reached number 12. The second album, Seimei-Ryoku (2007), followed, reaching number two on the charts (it lost to Backstreet Boys), and the third full-length, Kokuhaku, did the same in 2009, coming out after three more Top Ten singles in 2008-2009. ~ Alexey Eremenko, Rovi