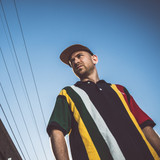 Rapper, guitarist, producer (Joel) Rapaport articulates personal thought bubbles, survival mantras and opaque moments through a sound influenced by grime, art rap, jazz and soul. Dense lyrics, dry humour, electric guitars dripped in reverb and a slapping drum break are most of his favourite things. For over 15 years Rapaport has been leaving his mark on Australian grime & hip hop. He has released two solo albums, Village Idiot (2018), Laughing On The Inside (2008), and two albums with hip hop group Loose Change, Self Titled (2010) and Listening Party (2013). He was nominated for Best Song at FBi Radio SMAC Awards in 2017 for ‘What I Got’ and was a Winner of the Triple J Unearthed NIDA competition for Loose Change’s ‘Grown Up’ Ft. Jeswon (Thundamentals) in 2013. In 2018 he was the main support for Butterfingers 13 date National Tour. He is the co-founder & owner of record label ‘Big Village Records’ which launched the careers of Tuka (Thundamentals), True Vibenation, Ellesquire & Suburban Dark and had critically acclaimed releases from Mathas & Omar Musa.

Rapaport is also the creator and director of freestyle rap, live art game show ‘Sketch the Rhyme’ which performed at Edinburgh Fringe Fest, Adelaide Fringe Fest, Woodford Folk Fest & Perth Festival amongst many others. Rapaport’s forthcoming Dodo EP signals a new phase in his career with half of the songs being self-produced and all songs featuring himself on guitar.