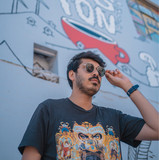 ABRZY (Ay. Breezy) was hit with the struggle from day one.

Born in Bangladesh as a young kid, ABRZY was exposed to a lifestyle that would one day spawn his creative muse and allow him to channel visions for a better future. New Zealand soon became his new home where a young Breezy was able to test out his flow, discover his sound and pave his lyrical pathway.   2016-17 were breakout years for ABRZY, where he released a slew of exciting singles, videos, and took his live performances to the next level, allowing him to open for international artists such as Kid Ink, Tinie Tempah, Lil Yachty and Bliss n Eso, with more on the way. 2018-2019 ABRZY kept his foot on the pedal amassing over 150,000 streams on Spotify. 2020, in midst of a global pandemic ABRZY delivered his critically acclaimed album called 80 Different Ways which was inspired by stories and experiences from his hometown. ABRZY blends Bengali with English lyrics to deliver a powerful message.   It soon became clear what had to be done. The Tiger is a survival machine with an eye for opportunity. Now back on the scene and hungry as ever, Breezy is ready to sink his teeth into more music, experiment with new flows and flex his claws with some killer wordplay, you might just need a neck brace for that double take. The kid has always delivered in the past and old habits die hard.   Find out more at: www.abrzy.com