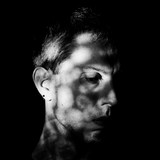 Elia was born in the colourful 80s and was raised in the suburbs, near the mountains. As a kid he studied the piano for some years without much enthusiasm, as he was more interested in the idea of playing his own pieces instead of music composed by others. He then started to use sequencers, synthesizers, effects, finding his own dimension. "AKE embodies the need to have a creative alter ego, something with independent shape and identity. Its name is a graphic acronym of my name, because I liked the idea of having a strong bond with this new creature after all." In the music he produces as well as in the listened one, the most important element is always the tone. Melody, harmony and rhythmics, though essential, move to the background. The tracks are a mixture of samples, drones created using granular synthesis, synthetic melodies and acoustic sounds.