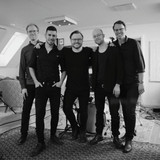 The award-winning Swedish quintet Jaerv, present an extroverted, vigorous and heartfelt folk music with influences from both jazz and pop music. Together, the five members have created a homogeneous, vivid sound which has established Jaerv on the folk music scene as well as in many other forums. Rooted in several different musical traditions, Jaerv offers a varied stage performance where vocal, five-voiced tunes blend in with energetic dances and free improvisations. Jaerv is an internationally well known act and has toured the U.S., Japan, Spain, Scotland, Ireland, Finland and Norway among other countries. "Meet Jaerv! An innovative Swedish folk quintet with jazz and pop leanings who flawlessly blend original songs with stellar takes on captivating Scandinavian folk songs, some dating back 700 years. The combined talent, humor and professionalism these impressive men exude is unparalleled. Musicians. Vocalists. Songwriters. See them. Feel them. Experience them. Be moved by them and move with them. Jaerv!" Jeffrey De Hart - Billboard, Swedish Correspondent “They are singing, playing, storytelling and are so terribly good. The audience is knocked out by their performance!” Susanne Rydén - Royal Academy of Music "One of Sweden's most inventive folk bands." Nordstjernan magazine