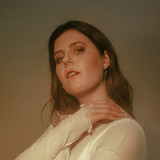 The music of LUME is a melting pot of ideas, of sounds, of places. Weaving her way down South from her native Manchester and ending up in Brighton, LUME discovered a new home and a newfound creative freedom. There is a palpable yearning in LUME’s music. A familiar emotive thread which she has been pulling; from her debut EP Tip of Your Thumb via the masterful Edge of My Seat

(which earned a co-sign from Taylor Swift, featuring the title track on her ‘International Women’s Day' Playlist) and woven into the fabric of her latest offering. Venus is LUME’s most accomplished release to date, once again raising the bar as a genuine all-rounder: songwriter, producer and artist with an increasingly clear creative vision. She has been championed by the likes of: BBC Radio 1, BBC 6 Music, BBC Introducing, Line of Best Fit, Clash, Complex, Pigeons and Planes & Mahogany amongst others.