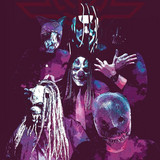 Formed in 2011, O.S.R 313 (On Surge's Rhapsody 313) is a 7 Piece Rock /Nu-Metal band from Singapore. They've been active in the underground music scene ever since their inception in the earlier 2010's, playing many different styles of rock and metal. After the band had gone through several line-up changes, they've finally refined their sound and style in 2016. Adopting masked personas, they've added theatrical element to their on stage performance. Tales of the supernatural in Asian folklore, to the stories of the Pharaohs. O.S.R 313