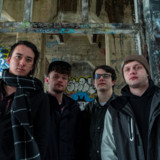 The Stone Eye is a progressive sludge-rock band from Philadelphia (USA) which combines uniquely-glorious weirdness with clever musicianship. Eclipse Records has signed the Philadelphia based band, The Stone Eye, and everyone’s pumped. The new record, titled South of the Sun, is one of those gems that is familiar somehow, yet takes the listener on a journey mapped out in new pathways. Heavy with a layer of glorious weirdness, this album combines a raucous, dirty guitar sound with clever musicianship…vocals that are as hypnotic in harmony as they are diverse in range…a rhythm section as daring as it is ornate and, at times, funk-a-licious. The Stone Eye are the epitome of the saying, I sometimes don’t know where they are going, but they always seem to get there. The band induces the listener to explore and evolve. Conversely, they play like they know us. Like good old friends. Like coming home. “South of the Sun” will be released worldwide via Eclipse Records on October 15, 2021.