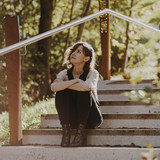 Sam Wilson is a Canadian guitarist living on the east coast in Nova Scotia. Painting pictures with sound, her compositions reflect her love of jazz, improvised and instrumental music, stemming from African American music traditions. ‘With a lyrical sensitivity to her instrumental compositions, her music draws listeners in with subtlety and introspective levity. Bringing a distinctive angle to her jazz-informed arranging, she creates nuanced space for improvisation and discovery, all framed by her compelling melodicism’. Her 2019 debut release Groundless Apprehensions was nominated ‘Jazz Recording of the Year’ for the Nova Scotia Music Awards and the East Coast Music Awards. Groundless Apprehensions is a post-bop modern jazz compilation featuring Sam’s original music and arrangements. On September 25th, 2020, she re-released her 2017 EP Into A Heart as a full length album on Muzak Records in Japan, released on January 29th, 2021 to the rest of the world as Into a Heart Pt. II.