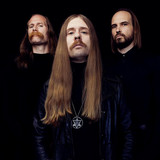 Kadavar are a German rock band from Berlin, founded in 2010. Their retro style, incorporating psychedelic rock and stoner rock, has been compared to bands of the 1970s hard rock/heavy metal era. Their first recording, an eponymous two-song CD-R, was self-released on 25 August 2011. On 12 July 2012, Kadavar's self-titled debut album was released on Tee Pee Records. A collaboration with the band Aqua Nebula Oscillator resulted in the release of the White Ring album in November 2012 In July 2013, Lippitz left the band to concentrate on his new group the Loranes. He was replaced by Bouteloup, previously of metal band the Oath. After several live performances, Bouteloup was officially announced as a new member. Their second album, Abra Kadavar, was released on 12 April 2013 by Nuclear Blast and debuted at No. 42 on the German charts. In early 2014, Kadavar started touring with fellow retro-style hard rock band Wolfmother. In June 2015, Kadavar announced their third album, Berlin, on their Facebook page. It was released by Nuclear Blast on 21 August and included a cover of Nico's "Reich der Träume" as a bonus track. In 2015, drummer Bartelt co-wrote the song "Wedding" with Andrew Stockdale. It was released on 19 February 2016 as a bonus track on Wolfmother's fourth album, Victorious. Kadavar's fourth album, Rough Times, was released on 29 September 2017. Their fifth album, For the Dead Travel Fast, was released on 11 October 2019.