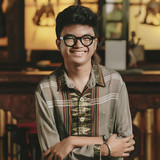 A funny thing happened to Joey Alexander over the past five years, a whirlwind period during which he became the most brilliantly precocious talent in jazz history—that is, a renowned festival and concert-hall headliner; the youngest musician ever nominated for a Grammy Award in a jazz category; and a media favorite who’s earned a profile on 60 Minutes, a front-page profile in the New York Times and other premier coverage. As heard on WARNA, his new major-label Verve Records debut, he’s simply become one of the most expressive and thrilling pianist-composers currently at work in jazz. Translating as “color” from Alexander’s native language of Bahasa, WARNA follows four Motéma Music albums that garnered the pianist three Grammy nominations and such honors as historic critics’ and readers’ poll victories in DownBeat and JazzTimes. But whereas those recordings were documents of an extraordinary young musician in development, WARNA is primarily a collection of reflective, moving new music by an experienced, confident bandleader. He arrived in New York as a lightning bolt in the spring of 2014, performing at Jazz at Lincoln Center’s annual fundraising gala. At the helm of a packed-out theater containing some of Manhattan’s most elite arts benefactors, Alexander dropped jaws with a remarkably lyrical rendition of “’Round Midnight.” A standing ovation ensued, and Alexander hasn’t slowed down since.