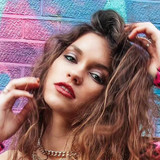 Keeana Kee arrived in New York just four short years ago. Since then, the Latvian-born, London-raised supermodel has been making impressive inroads with her first love - making music. Not one to shy away from controversy, her music and videos have touted her sexuality, with one of her recent songs, ‘Sweet Heaven’, offers veiled criticism at the US’ increasingly harsh border policies. Growing up in eastern Europe, Keeana wrote her first song in english at the age of 10, taking inspiration from a host of artists contemporary and classic, including Whitney Houston, Aretha Franklin, Beyoncé, Ray Charles and Mariah Carey. She imbues her music with her vibrant, carefree personality, creating a playful and sensuous sound that she hopes will encourage positivity and joy in her listeners. Kee has worked with some of the leading DJs, remixers and producers in the world, including Dirty Disco [‘Shoot Me up (Dirty Disco Remix)'], Yence505 [‘Genius (Yence505 Remix)’], and Luca Bisori (‘Coconut Rum and Coke - Luca Bisori Deep Vibez Remix'), as well as featuring Latin rapper Kid G on ‘Open Arms’. Follow Keeana Kee on Spotify to keep up to date on her new releases!