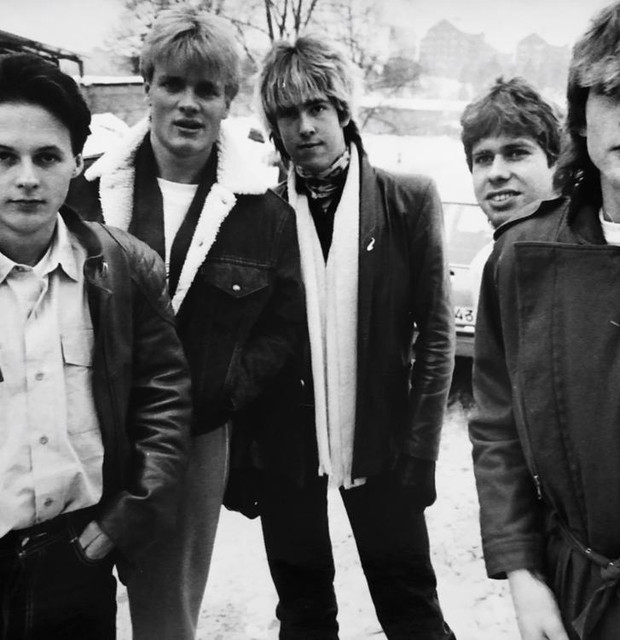 In 1977 Per Gessle met Mats Persson forming the duo Grape Rock. Micke Syd Andersson, Anders Herrlin and Göran Fritzon joined 1979 and the quintet was born. In 1980, the debut album ”Gyllene Tider” was released, becoming a huge success in Sweden. "Flickorna på TV2" was the first song to top the charts. The second LP ”Moderna Tider”, 1981, sold five times platinum and was followed by a record-breaking national tour. 1982 ”Puls” was released, including the hits "Sommartider" and "Flickan i en Cole Porter-sång". 1985 Gyllene Tider officially broke up after releasing their only album in English; ”The Heartland Café. Per Gessle continued with a solo-career and formed Roxette with Marie Fredriksson in 1986.   After the break-up several platinum-selling compilation albums have been released. In 2004 GT delivered the first new album in over 20 years, and a huge summer tour. The tour was a massive success, being the biggest tour in Scandinavia ever and the 2nd largest of 2004 in the whole of Europe, gathering over half a million people. In 2013, the group released a new double-platinum album and did yet another sold out arena tour in Sweden, both called "Dags att tänka på refrängen". In 2018 the band made the official World Cup song for the Swedish Soccer Team, “Bäst när det gäller”. In 2019, 40 years after the band was formed, they announced their farewell tour. The final tour sold out arenas all over Sweden. Their last studio album "Samma skrot och korn" was released in June 2019