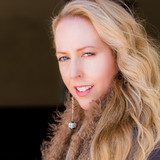 World jazz with urbane cool. Growing up on the border with Mexico, Allison’s love for languages and world cultures began at an early age. This "wanderlust" is reason for the global music she sings today— It's all about the human connection, and music is the universal language.  Allison's debut album "Come With Me" (2008) received international acclaim and was nominated for Best Jazz Album 2009 by the San Diego Music Awards.   Allison's sophomore album "April in Paris" (2014) celebrating songs of springtime from around the world, was recorded in Paris on UNESCO's 1st Annual International Jazz Day at the end of a Europe tour with international musicians from five countries.   Allison's third album "WANDERlust" (2016) was recorded in New York City and features a stunning all-star ensemble. The songs are musical postcards from distant points of interest, from Rome to Paris to Takeda, Japan-and even destinations that exist purely in the mind's eye.   Allison returned to New York City in January 2019 to revisit her pop-punk past with the recording of her fourth album RETRO Trilogy - jazz re-imaginings of 3 decades of music from the 1970s, 80s, 90s, by David Bowie, Queen, The Cure, Sting and more, to be rolled out in 3 separate EPs across streaming platforms, and then released as one CD.   Allison's voice can be heard on tv commercials and on the video game "The Saboteur" soundtrack singing French jazz in the company of Nina Simone, Ella Fitzgerald, Madeleine Peyroux, & others.