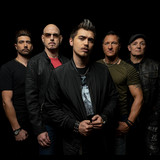 One of the more prominent bands in the new millennium's post-grunge scene, Fuel originally comprised the talents of singer/guitarist Brett Scallions, guitarist Carl Bell, bassist Jeff Abercrombie, and drummer Kevin Miller. The band took shape in Tennessee in 1989, crafting a blend of polished guitars and melodic melancholia, before relocating to Pennsylvania in 1993. While playing gigs on the local nightclub circuit, Fuel made its studio debut with an independently released EP, 1996's Porcelain, which sold over 10,000 copies locally and spawned a hometown radio hit with "Shimmer." Such success brought Fuel to the attention of Sony's 550 imprint, which released the EP Hazelton the following year. The band's full-length debut, Sunburn, followed in 1998. "Shimmer" proved to be Fuel's calling card once again, as the kinetic single became a modern rock hit and nearly cracked the Top 40. Additional singles like "Bittersweet," "Jesus or a Gun," and the title track (featured on the Scream 3 soundtrack) also earned airplay, propelling Sunburn to platinum record status. Fuel's second album, Something Like Human, followed two and a half years later and launched the hit "Hemorrhage (In My Hands)," which proved to be the band's biggest single to date. The album itself reached number 17 on the Billboard charts; within a year of its release, it had climbed to double platinum status, making Fuel one of the more successful rock acts of the year. Released in 2003, Natural Selection sold 71,000 copies in its opening week thanks to the strident lead single "Falls on Me." The album quickly fell from the charts, however, and following the 2005 release of Best of Fuel, frontman Scallions amicably parted ways with the band. Several months later, Fuel's remaining members watched as American Idol contestant Chris Daughtry performed a solid cover of "Hemorrhage (In My Hands)" during the show's fifth season. They offered him the position of Scallions' replacement, but Daughtry ultimately turned the gig down, opting to launch a career of his own instead. Undeterred, Fuel enlisted Toryn Green as the band's new singer and began to work on a fourth studio album, Angels & Devils. Meanwhile, ex-Godsmack drummer Tommy Stewart filled in for Kevin Miller during live performances and eventually became a permanent part of the group. Other obligations prevented Stewart from recording during the Angels & Devils sessions, however, and Nine Inch Nails/A Perfect Circle drummer Josh Freese was brought in to temporarily handle percussion duties. Angels & Devils was ultimately released in August 2007. ~ Jason Ankeny & Andrew Leahey, Rovi