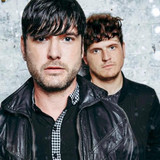 Brothers Lee and Nick Meldrum burst onto the scene in 2016. It’s been a high octane time for Brighton two-piece SONS, who are signed to emerging label 'End Of The Trail Creative' (Family Jools / Pip Hall). Darlings of incendiary rock n’ roll club night This Feeling, all four singles have been heavily rotated by indie/rock radio luminaries Steve Lamacq, Huw Stephens, John Kennedy and Alex Baker - as well as impressing the likes of Kerrang Magazine, Clash Music and Team Rock. They also have two live radio sessions under their belts, for Radio X and BBC Introducing. Meanwhile, the band have taken their cacophonous live set on the road, gigging up and down the country with highlight sets at Reading Festival, Isle Of Wight Festival, Tramlines, The Great Escape, Camden Rocks, a European tour 2018 and most recently Obstwiesen festival, Germany 2019. With explosive vocal melodies and buzzsaw riffs that could wake the dead, if you like it loud with a lot of hooks, you’ll love SONS! “Every single tune they put out is a total punk banger isn’t it?" Alex Baker, Kerrang! Radio. "The band that are at the centre of a blizzard of hype at the moment, biting riffs, stellar choruses, Sons could make 2018 their own" Clash Magazine. “Sounding fantastic!... It’s yet another winner from SONS! A dynamic duo from Brighton!” John Kennedy, Radio X. "The Brighton duo have unleashed this big, snarling slab of punk rock and it's brilliant' 'On The Stereo' Kerrang! Magazine.