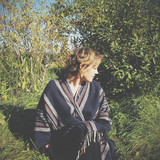 Ösp grew up in a valley in North of Iceland with her musical family. Together they would play folk and traditional music and perform professionally together across the country. In 2010, along with her brother and close friends, they took to the stage as a band called Brother Grass. The folk/americana/bluegrass group released two albums together and have gained a loyal following and have had an airplay on BBC Radio. After studying classical singing and jazz singing, Ösp moved to the city of London in the autumn of 2011 to study further in music and to pursue a solo career. Inspired by the vocals of Ella Fitzgerald, the stories of Joni Mitchell and by her own nordic folk roots, she began to write her own songs and for the past 3 years she has been performing with her band in various music venues and festivals in the UK and Iceland, such as Cambridge Folk Festival, Festival No6, UnampliFire, Reykjavík Folk Festival and Iceland Airwaves. Her debut album, Tales from a poplar tree was released on March 22nd 2017 and was nominated as the Folk album of the year at the Icelandic Music Awards.