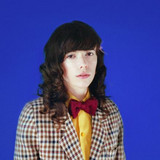 The songs were written, the band was ready, and the studio was booked. Fans and critics alike were eagerly awaiting the follow-up to Natalie Prass’s 2015 self-titled breakout album, a collection hailed by NPR as “a majestic debut,” but perhaps no one was more eager for record number two than Prass herself.

By the time recording sessions were scheduled to begin, she was absolutely dying to launch the next chapter, which made what happened next all the more shocking: she scrapped the whole thing. “The record was ready to go, and then the election happened,” explains Prass. “I was devastated. It made me question what it means to be a woman in America, whether any of the things I thought were getting better were actually improving, who I am and what I believe in. I knew I would be so upset with myself if I didn’t take the opportunity to say some of the things that meant so much to me, so I decided to rewrite the record. I needed to make an album that was going to get me out of my funk, one that would hopefully lift other people out of theirs, too, because that’s what music is all about.” The result is ‘The Future And The Past,’ a stunning work of art and a powerful feminist statement from an artist who’s only just begun to tap into the full range of her considerable powers. Prass displays a rare gift for transcending time and place in her songwriting, tapping into age-old struggles for autonomy and equality that resonate profoundly in the present.