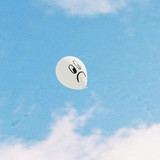 LARRY PINK THE HUMAN are the new band comprising of vocalist, guitarist and songwriter Laurie Vincent and super-producer and songwriter Jolyon Thomas. The ethos of LARRY PINK THE HUMAN is to challenge normal human perceptions, no better demonstrated than with the band members themselves. Jolyon, whose work as a producer includes such artists as M83, U2 and Royal Blood, is now stepping out from the studio and onto the stage as a songwriter and performer, while Laurie who as a guitarist forms one half of the band Slaves, takes the role of lyricist and frontman for the first time. In short, Laurie and Jolyon have set out to make art that can stand alone in any environment, a band that has no real limits or restrictions and acts as its own entity that is rich with honest and original creativity.