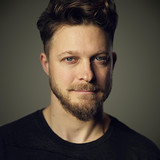 Benjamin Scheuer is an American songwriter, performer, and playwright. He wrote and starred in the critically acclaimed one-man musical THE LION, which toured the US and Europe from 2014-2017. THE LION won the 2015 Drama Desk Award for Outstanding Solo Performance and the 2015 Off-West End Award for Best New Musical in London. Scheuer released his album “Songs from THE LION” in 2016 (Warner/ADA.)

In collaboration with director Peter Baynton, Scheuer created animated videos for his songs “Cure,” “The Lion,” “Cookie-tin Banjo,” and “Weather The Storm.” These videos garnered two consecutive Public Choice Awards for Best Music Video at the British Animation Awards, Best Commissioned Film at the Annecy Film Festival, and Best Music Video at London’s Encounters Film Festival. Scheuer wrote the song and children’s book “Hibernate With Me,” illustrated by his wife, Jemima Williams. Their next book for kids, “Hundred Feet Tall,” will be published in 2020. Scheuer is a survivor of Hodgkins Lymphoma. With photographer Riya Lerner, he created the photography-book “Between Two Spaces,” from which 50% of proceeds benefit the Leukemia/Lymphoma Society. Scheuer is working on new album and writing a new musical. He lives in New York City.