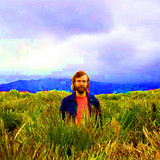 Gaui, Icelandic born and raised. He had been writing songs for a long time in his home town Reykjavik but kept it a secret to the public. It wasn't until he moved to Berlin he met like-minded people and started to play his music with them as Volcano Victims. His music was deeply influenced by Iceland's dark and cold winters. Gaui's first EP is drowned in melancholia and gentle melodies. "Iceland isn't only about long and dark winters. The summers are bright and full of optimism. Writing melancholic songs just came easier to me". Since then his music has shifted to more uplifting tunes influenced by Berlin's carefree summers. It's these different soundscapes and colours that makes Volcano Victims a memorable tapas-like experience. Volcano Victims released their first LP on February 12th, 2021. A number of songs on the self-titled album date as far back as 2004. The old songs have matured throughout the years with added layers for richer texture. Hanna Magdalena Gödl is the lead vocalist on most of the tracks. Her vocals range from playful in Canicular Years to fragile in Post Storm to energetic in Fool. Oxford Street is haunting and the depressing lyrics makes you want to sit back on the sofa wrapped in your security blanket. "One of my favourite artists include Yo La Tengo, Cass McCombs, Bill Callahan, Belle & Sebastian, Dirty Projectors and Tame Impala. The list is endless really, but I don't hear a direct influence from these artists. It's up to others to judge that.