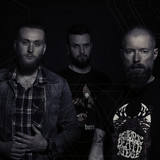 Cities of Mars a k a The Cosmonauts of Doom New album - The Horologist - out on Ripple Music, continuing the story of the ancient civilization on Mars, discovered by a Soviet KGB cosmonaut in 1971. Cities of Mars is a psychedelic fuzz/doom band hailing from Gothenburg, Sweden. The band was formed in 2015 when Danne Palm (bass/vox) teamed up with Christoffer Norén (guitar/vox) and Johan Küchler (drums/backing vox) to create a heavy band with an integrated storyline - where the KGB cosmonaut Nadia lands on Mars on a covert mission in 1971 and shortly after disappears into the misty depths of an ancient conspiracy. In June 2015, the band released the first two chapters of the story, The Third Eye/Cyclopean Ritual two-track single, with Esben Willems of Monolord and Berserk Audio producing. In 2016, the band did its first European tour with the new vinyl EP Celestial Mistress. 2017 saw extensive touring alongside the debut album Temporal Rifts, followed by more gigs across Europe in 2018. New songs were taking shape into the most ambitious production to date - an album where prog elements, odd meters and acoustic guitars became more evident alongside atmospheric layers of percussion, vocals and synthesizers. Now signed to the Ripple Music label, eight tracks were recorded into The Horologist, released April 5th 2019, followed by a massive Euro tour in May, including Desertfest London. www.citiesofmars.se